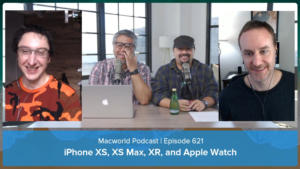 Similar
0 comments
View the transcript | Show production credits
Comments
Hide comments
If you’ve been waiting to get an Apple Watch, or to replace the one you have, until “the big upgrade” … Well, this is it.

The bigger display, faster processor, and better sensors all combine to make the Series 4 dramatically better than any Apple Watch before it.

We’re now entering the Apple Watch’s fourth year, and its going through its first real major revision. In that way, it’s just like the iPhone 4.

The outward appearance hasn’t changed a whole lot. The watch has grown a couple millimeters larger--the 38mm size is now 40mm and the 42mm size is now 44mm. But it’s thinner, and the corners are a litlte more curved, so you probably won’t really notice the difference in size.

What you WILL notice is the huge display. It’s grown more than 30 percent, pushing way out toward the edges of the case, with matching curved corners. It’s sort of that iPhone X look on your wist.

Now, the small-sized watch has a display as big as the old LARGE watch, and the large watch is even bigger.

It has a huge impact on usability. Tap tagets are bigger, text is easier to read, maps are clearer. Basically everything you do on the watch is made better, MUCH better, by the bigger display.

It’s also allowed Apple to introduce a couple of new intformation-dense watch faces: Infograph and Infograph Modular. People have mixed opinions about how they look, but after using Infograph for awhile, it has become my go-to watch face. I just love how many complications I can cram on here.

The other change you’ll notice right away is the much faster performance of the S4 processor inside. Apple says it’s up to twice as fast as the Series 3, and I believe them.

Everything just FLIES. Scrolling is buttery smooth. Swipes and taps register instantly. Apps just spring right open with no delay. Every little stutter and pause has been effectively eliminated, and it has totally changed the way I use Apple Watch.

I used to primarily use apps that you just set-and-forget, like workout tracking, because I don’t want to wait a few seconds to interact with something on my wrist. I might as well pull out my phone and get a richer experience.

Apple has also, for the first time, seriously improved the sensors in the Series 4. The accelerometer and gyroscope are much faster and can detect forces up to 32gs.

That has given Apple the ability to add accidental fall detection. Take a tumble, and the watch will bring up a screen that makes it easy to call emergency services. If don’t do anything for a minute, it will automatically call them and message your emergency contacts with your location. It’s a feeature aimed at seniors--it’s not even enabled by default if you’re under 65--but it’s really going to help some people.

I tried and tried but I could not fake a fall convincing enough to set it off.

The optical heart rate sensor is new, and is more accurate and power-efficient. But the big new heart-health feature is the built-in single-channel electrocardiogram. Launch the ECG app, hold your finger on the crown for 30 seconds, and you get an ECG graph you can share with your doctor, along with an analysis that may point out irregular activity.

Unforunately, this feature has only been cleared by the FDA for the U.S., and then only for people age 22 and older. And it’s not even available yet, it’s coming in a software update this fall. Apple says its working on getting clearance for other countries, but can’t give us a timeframe.

There are a number of other minor improvements, too. The digital crown has haptic response now, so it makes subtle little “tiks” as you scroll it. It feels nice. In fact all the haptics feel a little better now--I think Apple improved the Taptic Engine and didn’t say anything.

The mic is clearer with better noise reduction, and the speaker is a LOT louder, so making short phone calls from your wrist works really great now. It’s no longer just a gimmick.

An despite the thinner case, bigger display, and much faster processor, the Series 4 has the same excellent battery life as the Series 3. Apple says it’s “up to 18 hours” but I got over 30 when using like I normally do--tracking workouts at the gym, asking Siri some questions, checking the weather, getting a few important notifications, and setting timers while I cook dinner.

Tracking outdoor workouts, streaming music from the watch, and making phone calls, especially over LTE, will definitely run through the battery more quickly. Still, you’d have to try really hard to run out of power before the end of the day.

There are still some things I wish the Apple Watch would do. Like integrated sleep tracking instead of relying on third-party apps, or custom watch faces, or an option for always-on watch faces. And I wish the battery life lasted for several days like the Fitbit Ionic.

And sure, it doesn’t sound all that impressive to say: it’s still an Apple Watch, but with a bigger display, faster processor, and better sensors. But as far as hardware goes, that almost EVERYTHING. Those things combine to make the experience of using a Series 4 just leaps and bounds better than any Apple Watch before.

I’m not thrilled about the price hike--the Series 4 STARTS at $399 and goes up quickly if you choose options like stainless steel or LTE. But I’ve spent the last three years looking forward to the future of the Apple Watch, and with the Series 4, I feel like it has finally arrived.