More Recent Videos
More Popular Videos
Mobile
IDG.TV
5 features that have us excited about iOS 12
More for you to like: 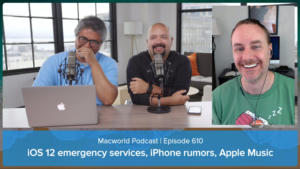 5 features that have us excited about iOS 12

iOS 12 is coming this fall with lots of new features, but these are the ones we’re most excited about.

Similar
0 comments
View the transcript | Show production credits
Comments
Hide comments
iOS 12 is coming and it’s got a whole lot of new features. Here are the five biggest ones that have us really excited for its release this fall.

Maybe the most significant new feature of iOS 12 isn’t really a new feature at all. It’s Apple’s commitment to improving performance, especially on old devices like the iPhone 6+. Apple says apps launch up to 40% faster, or even twice as fast under heavy load. The keyboard pops up 50% faster, and the camera loads 70% faster.

Even with the early beta of iOS 12, we’ve noticed big improvements over iOS 11.4. Everything is snappier and smoother, with less stuttering and dropped frames.

These improvements are going to really help people with three-year-old phones who aren’t ready to replace it just yet.

iOS 12 also makes some big improvements to notifications. Finally, notifications are grouped together, which will really clean up that notification screen. It’s much faster and easier to set notifications for a particular app to come in quietly or to turn them off entirely. Every iPhone user I know? Their notifications are a mess. These changes should really help clean things up.

Siri’s getting a lot more useful in iOS 12, too. It’s not necessarily going to start giving you better answers for your random questions--instead, Apple’s focusing on two other big new features that will totally change the way we use Siri.

Siri Suggestions used to just recommend apps when you swipe down, but now it can hook directly into apps to link to specific actions. And it uses machine learning to learn how you use your phone, and check your calendar, your messages, your contacts, all to give you specific suggestions. For example, it might have a link to call or text your friend on their birthday, or to play your workout playlist when you go to the gym.

Then there’s Siri Shortcuts. A new app named Shortcuts app is coming, and it’s basically a redesigned version of the awesome Workflow app, which Apple bought last year. You can queue up and tie together multiple actions, and then give it your own custom Siri voice command. So when you say “Hey Siri, it’s time to go home” your phone will pull up driving directions to home, text your spouse with your ETA, play your driving playlist, and set your smart thermostat to 74 degrees. All with one voice command. It’s really flexible and powerful and is going to totally change the way we use Siri.

We’ve been hoping Apple would give us proper parental controls for years, and Screen Time in iOS 12 that and so much more. It gives you tons of data on how often you use your phone, and when, and how long you use different apps. You can even see how often you pick up your phone. You can set time limits for apps, schedule downtime to avoid using your phone too much, block purchases or mature content, and parents can control all this stuff for their kids from their own device and get weekly reports about how they’re using their device.

The iPhone X introduced Animoji, and iOS 12 expands them with customizable avatars that Apple calls Memoji. They’re a lot of fun and a little more useful than Animoji, and in iOS 12 you can use Animoji and Memoji in the Messages camera app and in FaceTime, too.

Of course that’s not all that’s new in iOS 12. There’s new ARKit stuff, improvements to Face ID, FaceTime group calls, improvements to Safari, Stocks, News, Books, CarPlay… it’s shaping up to be a really substantial release. But these are the things we think will have the biggest impact.