Instead of replacing your Alienware laptop, you can connect it to the Graphics Amplifier and give it full desktop-level graphics power.

Yes, this is the Alienware Graphics Amplifier, an external cabinet that lets you take your GPU of choice and play games on your laptop with it.

That means you can run this Gigabyte 290X card or this PNY GeForce GTX 980. And if you’re rolling hard enough, you can even game with this GeForce GTX Titan X card I have running right now inside the amplifier.

The Amplifier features a 460 watt PSU and gives you two 8-pin PCIe plugs for power. That’s enough power to run almost anything that you can physically fit in the Amplifier.

How does it work?
Install your card, install the drivers on your laptop, plug in the Amplifier’s 6-foot cable and let her rip. Perhaps one of the coolest features of the Amplifier: it actually works with your laptop’s monitor. Some of the competing products force you to run external monitors only while you can run internal or external with the amplifier. Alienware also includes four USB 3.0 ports so you can plug a keyboard and mouse into the amplifier full time. That means it functions as an external docking station too. HARDCORE


The Caveats
The Amplifier has been on sale for a few months now but let’s just say it hasn’t been the smoothest for everyone (beta test). The good news is that most of the kinks have been worked out. Not all of course. For example, the Titan X needed tweaked drivers but Alienware claims that’s only a problem in the first few weeks after a new GPU comes out and then, you just download drivers from AMD or Nvidia.

How it performs
Performance, as you’d expect is hardcore. Tomb Raider set to Ultimate on a 4K panel is an unplayable 18 frames per second. With the Titan X, you’re pushing 46 fps. A triple Titan X system with an 8-core overclocked CPU pushing it hits 136fps.

There are concerns over the x4 PCIe Gen 3 connection the Amplifier uses, but I’ll say, that’s still 4GB/s of bandwidth. For comparison, Thunderbolt 2 maxes out at 2.5GB/s. Still, there may be some times when that bandwidth bites you but it’s better than being stuck with your laptop graphics.

What’s great about the Amplifier setup is the connector is now in all of Alienware’s gaming laptops and it’s optional. You can buy, say, this $1,500 Alienware gaming laptop with its dual-core and GeForce GTX 970m and in year when it the GPU runs out of steam for you, you can buy a $300 Amplifier and grab whatever hot graphics card is out. Competing setups require you to buy into the graphics cabinet with the laptop up front.

The only real downside I see? The special port can only be found on Alienware laptops so the Amplifier won’t work anywhere else. But then, if you’re Alienware, that’s no downside at all, that’s HARDCORE. 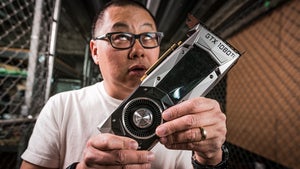 Hardcore Hardware
You can take your gaming with you with MSI's GS63VR Stealth (2:20)

Hardcore Hardware
Intel’s 10-core chip is a monster performer at an insane price (1:50)